Nefertiti Clavon, 22, struggles to keep up with rising tuition costs and other college expenses.

“There were times I felt I was going to have to leave school because of financial situations,” said Clavon, a health promotions student at the University of Houston in Texas. “I’m grateful there is a scholarship available for female students pursuing healthcare studies.” 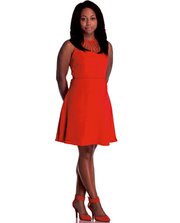 Besides easing the financial burden for students, the American Heart Association and its supporters are striving to increase the number of underrepresented minorities in medicine and increase culturally sensitive, patient care.

Only 5.4 percent of African-American and 3.6 percent of Hispanic nurses in the nation are registered nurses, according to the Bureau of Labor Statistics. In contrast, minorities make up 36.6 percent of the U.S. population.

“Building a diverse physician and medical workforce is a critical component in the delivery of patient-centered care to the multicultural communities that will enter the healthcare system once the Affordable Care Act is implemented,” said Dr. Jennifer Mieres, senior vice president in the Office of Community and Public Health, chief diversity and inclusion officer for North Shore— LIJ Health System and American Heart

Association Go Red For Women spokesperson. “The recruitment of talented, young diverse women into the healthcare field is a critical step in the delivery of quality, culturally-sensitive, patient-centered care.”

Numerous ethnic groups— including African-Americans and Hispanics— are disproportionately affected by cardiovascular disease and risk factors. They also face barriers to diagnosis and care and experience worse health outcomes than Caucasians.

The Go Red™ Multicultural Scholarship is made possible by the Macy’s Multicultural Fund, which was created in 2009 to focus on increasing diversity in the medical field. Macy’s is a founding national sponsor of the American Heart Association’s Go Red For Women® and Go Red Por Tu Corazón, raising more than $46 million since 2004.

“Encouraging and supporting multiethnic students as they join the ranks of healthcare professionals will more effectively impact the disproportionate rates of heart disease among women in their own communities,” said Bill Hawthorne, Macy’s senior vice-president of Diversity Strategies.

For more information and to complete an application, visit: GoRedForWomen.org. The deadline to apply for 2014 scholarships is December 31, 2013.